Rabbits for Food – A Book Review 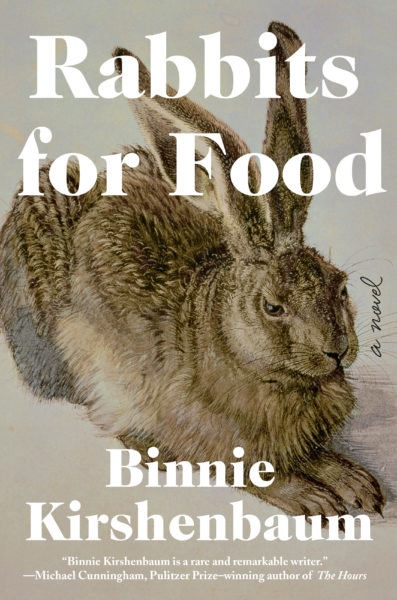 Binnie Kirshenbaum’s Rabbits for Food is worth reading for the brilliant prose and descriptions alone, lines like:

“At first glance it looks as if Lydia shopped for her outfit in a laundry basket: a grey sweater buttoned incorrectly rendering it asymmetrical, a teal-blue tulip skirt, lemon coloured tights that sag and pink ballet flats. The overall effect is of a middle-aged woman dressed like the kind of goofy twelve-year-old girl who gets overly excited about origami.”

And this little gem:

“The professor wore black-framed eyeglasses to announce her fierce intelligence, and her haircut was as sharp and ugly as her tone of voice.”

But the subject matter shines a much-needed bright light on mental illness, and it is this that makes Rabbits for Food a book the world needs today. In the vein of Kesey and Plath, never shying away from the black reality of the mentally ill and the mental health system, Kirshenbaum’s portrayal of what it’s like to suffer from clinical depression is brave and raw. We see through the protagonist, Bunny, how depression has a way of making everything worse than it is, how it can make it unbearable to listen to meaningless small talk or act like you care about people’s petty problems. We see how depression makes it impossible to smile or laugh because all you feel is sadness and an unwillingness to pretend.

In one scene, while at a restaurant having dinner with her closest friends, Bunny is struck with the unsettling realization that she “cannot stomach those people,” followed closely by the realization that that isn’t exactly right – she likes them, she just wishes she liked them a lot more. It’s true that depression (or any number of other mental illnesses) can make it hard, if not impossible, to relate to the general public. Even your closest friends. And certainly, when you can’t relate to people, it makes it hard to stomach them, because all you want to do is shake them and make them see what you see, make them feel what you feel. But, of course, you can’t, as one of Bunny’s many mental health professionals pointed out in his “Bronx accent as thick and dark as history.” In one of the biggest and most uncomfortable truths in the book, he says to her:

“In the eyes of the world, Bunny, people such as yourself are the same as the mentally retarded. You’re both at the far ends of the spectrum. You’re not the norm. People in the norm, they can’t relate to what’s at either end. There’s nothing you can do to change that.”

The painful fact is that depression can’t be seen or measured, so the “normal” people of the world don’t know you’re irritable and disagreeable and disengaged because of a mental illness. They just think you’re an ass. As Kirshenbaum writes, “to be sick in the head is not at all the same as being normal sick. If you are normal sick, people will at least pretend to care. If you are normal sick people will call or even stop by for a visit. They will offer to run errands for you, pick up orange juice and NyQuil; they will offer to bring you soup and banana smoothies; they will offer to walk your dog.” Kirshenbaum is right – this doesn’t happen when your illness is all in your head. Such is the loneliness of mental illness.

In a flashback scene, Bunny is trying to get out of going to the family Thanksgiving dinner. She is remembering the previous year when “there was an infant, a cheesy-stinking font of spit-up, and everyone carrying on as if the parents had actually done something extraordinary like publish a book or win the lottery, until I broke in and said, ‘The earthworm is impressive because it impregnates itself.’ After that they all gave me the cold shoulder.”

In another flashback scene, when Bunny was nine years old, her mother had spent the day redecorating a section of the living room by hanging sheets of veneer made to look like old bricks. She calls her three daughters in to see her handiwork, gushing over how it looks just like real bricks. Bunny’s sisters praise their mother’s efforts and tell her that yes, it looks like real brick. Bunny, on the other hand, lacking the ability to feign agreement for the sake of boosting somebody’s ego, tells the truth – that it looks fake and that nobody would ever think it was real brick. Her mother flees the room and one of her sisters says, “And you wonder why no one in the family likes you.” This is a sentiment repeated later in the book, by Bunny’s other sister: “And you wonder why nobody likes you.”

I can tell you from experience, statements like that stay with a person forever and do absolutely nothing good for a depressed person’s state of mind. Kirshenbaum knows this, too. But this is what happens when you share views that dampen the mood of those who want to see only joy and beauty, who boost each other’s egos with flattery and celebration. You get the cold shoulder. You get told that nobody likes you. If we wish to belong, to fit in, to be liked, we must find a way to shed the cloudy veil and don our rose-colored glasses.

People will go to all sorts of drastic measures to do just that, and Bunny is no exception. We follow her through the journey of therapists, psychiatrists, and brain-altering meds, ending with the most drastic of “treatments.” We see the painful truth that the “fix” for depression is so very often not as easy as popping pills and talking about your problems. It is a journey those who have battled their own inner demons will relate to, and those who have not may gain an understanding of what it’s like for those who do.

Read Rabbits for Food for the beautifully crafted descriptions. Read it for the skillful prose. Read it for the brutal honesty of mental illness. Read it for the insight, to understand why and how your fellow humans suffer. Read it to learn that maybe that person you think is just rude and insensitive might be suffering the darkest reality imaginable, doing their best to get through life. For in today’s world (in any world), we could all use a little more compassion.

8 Comments on “Rabbits for Food – A Book Review”